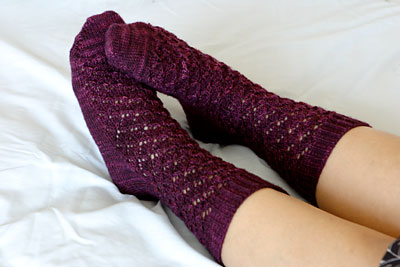 Modifications: Nothing major, I just substituted the lacy m1 stitches along the gusset increases with normal m1. The primary reason was because I forgot that it’s supposed to be the lacy m1s 🙂 but then I rather prefer the way it looks without the holes along the sides. 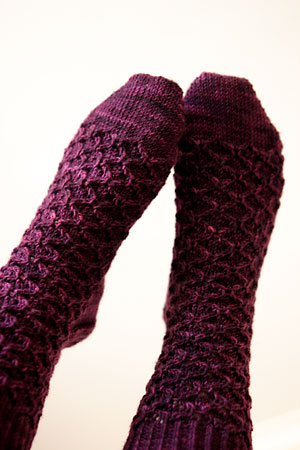 This is a great sock pattern. I love the way it looks, it has an openness to it due to the lace, but not too lacy. It has the right amount of texture for my liking. And although it looks hard, the stitch pattern is actually quite easy to memorise. Another big tick from me.

The pattern is very well written too, there’s no mistakes that I can see. This is the first time I made socks toe-up with heel flaps (instead of short row heels), so I just followed the instructions to the dot. And it worked like a charm. I like the heel flap look better than short row heels, so I’m very glad to discover this method. 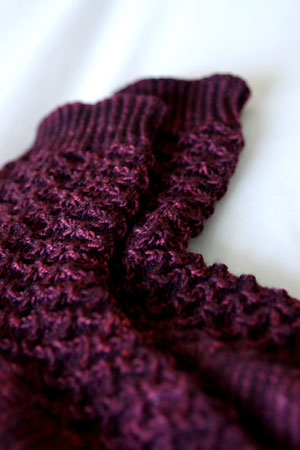 I have to say that Colinette Jitterbug is a great yarn. This is the first time I’ve used this yarn, and I’m very happy with it. I was a bit concerned about the shorter-than-average yardage for a sock yarn (267m/292yd in a skein), but then I managed to get a pair of socks out of the single skein with still a little bit to spare (your mileage may vary). The yarn itself is very nice to work with, it’s soft and tightly spun, similar to STR I think! It comes in some lovely colours too. I particularly love this ‘velvet plum’ colourway, I think the subtle variegation adds some depth to the texture. The colour did bleed a little bit when I gave it a handwash after I finished knitting it (the water had a pale pink tint to it) but that doesn’t worry me as I won’t be washing these socks in the washing machine with other garments anyway. And the colour was still vibrant after the wash. I definitely would love to use this yarn again. by hand. No, I didn’t think I’d have the patience either… To a ball, and then to this. The yarn is Colinette Jitterbug in velvet plum that I bought at the Sydney craft fair back in June (from Sarah Durrant). I’m knitting it up into these socks (pattern from Knitty). So far so good!