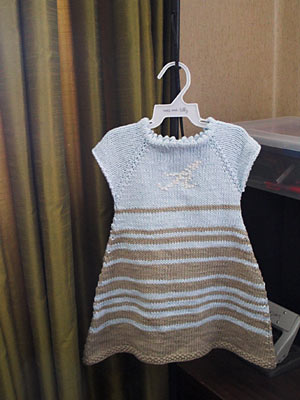 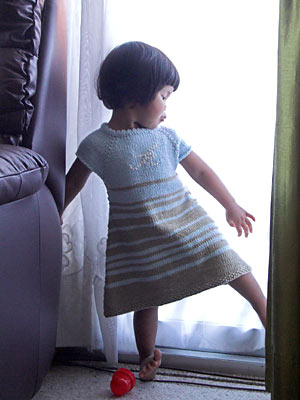 Pattern: Based on Picovoli pattern by Grumperina, published in MagKnits. Plus my modifications to make it a dress shape.
Yarn: Exactly 2 balls of Katia Cotton Club, in natural (light brown) and light blue.
Needles: 4mm/US8 aluminium circulars, using different lengths for different portions of the dress.

I don’t know whether I should get a medal for this, because although I finished all the knitting before the Olympic flame goes out, the blocking took longer than I expected, and it didn’t dry in time (it took more than 24 hours to dry!), even after I resorted to using a fan blowing at full force. The fabric is kind of thick. (Yes I could have steam blocked it, which would be faster, but I think the fabric feels a lot softer and drapes better after the blocking by full immersion. So I’m happy.)

The observant among you would’ve noticed the cross-stitching in the front. So that would be a late addition to this dress. And here’s where I present proof that I suck at cross stitch. It’s meant to be the letter A (pattern from the Special Knits book by Debbie Bliss), A for Annette. But the stitches are just so wonky, and I doubt anyone would be able to make out what it’s supposed to be without squinting. Sigh. I don’t know if I like it. It may have to be picked out later. 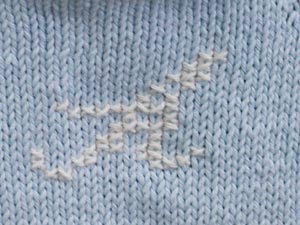 Oh, and another pic that I forgot to show you last time… Because I wanted to make the neck opening smaller than the original Picovoli pattern, I was afraid that Annette’s head might not be able to fit through it. So I decided to add a simple placket and a button at the back.

I liked the dress when I just finished knitting it. But after the blocking and after being modelled by Annette, it just looked so much better (or is it just my bias as a mother??) and now I loved it!

Sprinting to the finish line

Just in case you’re starting to wonder whether I have dropped out of the Knitting Olympics altogether, fear not! The mini picovoli dress is almost done! Here she is, blocking: 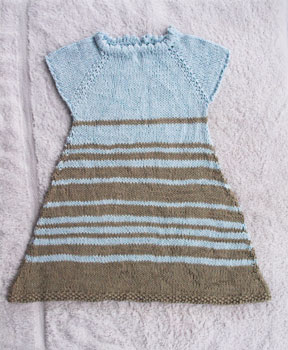 What’s that? Oh, I hear you, I hear you. That’s not the colours I showed you last time, did you say? That would be right, aye. I actually started with the yarn that I showed you in the last blog post (Heirloom 8 ply cotton), but the result was too see-through, not exactly what I wanted for a toddler’s dress. I know I can just go down a needle size or so, but I don’t have any smaller needles than the 3.25mm (US 3) that I was using 🙁 So, what to do? I remembered some Katia Cotton Club yarn in my stash, that’s a bit thicker than the Heirloom cotton, and so there it is.

This dress is based on the Picovoli pattern, but obviously I have made adjustments to make it more like a dress. I made the arm part a bit longer, so that it’s now more of a cap sleeve instead of sleeveless. Other than that, all I did was to make increases, after the armholes, on both sides every 3 or 4 rounds, and finished it with 4 rows of seed stitch.

And oh, the stripes pattern was generated by this cool Stripe Maker. 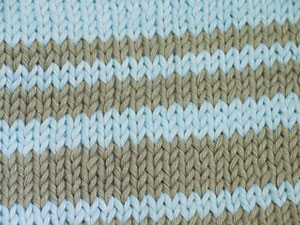 I chose to do the picot edging for the neckline. I love the way it turned out! It does make the hem rather thick, which I don’t mind for the neck line. But for the armholes I chose to leave out the picots. Here’s a close-up of the picot and the cap sleeve, from an older progress shot. 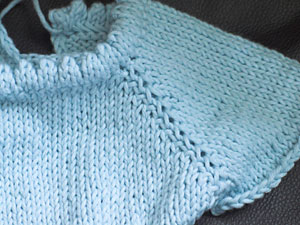 Overall, a good project. Plenty of rounds of stocking stitch made really good TV knitting. The only grief I had was the non-elasticity of cotton. I look forward to knitting with wool again. Now I hope it will dry soon so that I can take a model shot…

As you can see with the buttons on the right hand side bar, I am now officially a participant in the Knitting Olympics that is started up by the hilarious Yarn Harlot.

I decided to join because, well, I’d like to challenge myself and see if I can actually finish knitting something in 16 days. Plus it sounds like fun to be part of something together with thousands of other knitters 🙂

So what am I knitting? I’m making a striped dress for Annette (my almost two year old), based on the Picovoli pattern by Grumperina. Well, at least that’s the idea. The plan is for a dress. But the reality will depend on whether my yarns will be sufficient. But the beauty of this pattern is because it’s top down, I can just stop whenever my yarn is close to running out. If it’s too short to be a dress, it will be a tank top! Me, I’m an optimist.

I’m using Heirloom 8-ply cotton, one of the yarns that I bought last year in one of Tapestry Craft’s sale. Here they are: 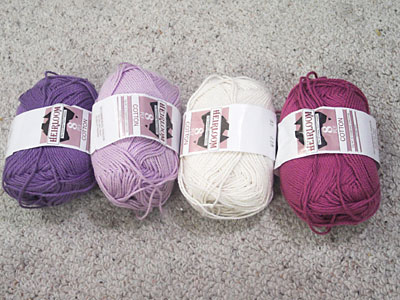 I’m not using the prescribed yarn, which means the gauge will be different. Some maths to do. With my luck with gauges, I expect there would be some frogging and reknitting. Also I expect I would need to modify the pattern a bit as I go, to make it fit my daughter, and to make it more dress-shaped.

PS. Just in case you’re wondering, the second and third buttons that are showing on the right there are taken from here.