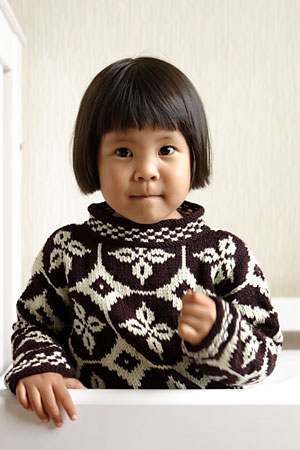 Pattern: Little Majolica from Interweave Knits Fall 2006. I was aiming for the smallest size, but because of the gauge difference in the yarn that I used, I followed the instructions for the middle size.
Yarn: Moda Vera 100% Merinos Fine, 3 balls of pale green and 3 balls of deep brown.
Needles: 3.00mm (neckband), 3.25mm (hem and cuffs), 4.00mm (body and sleeves).

If you’re making this, check the errata. There’s supposed to be an extra row that’s not included in the original chart. I realised this when comparing my knitting (after I finished the back) with the photo in the magazine. But I decided that it doesn’t look too different, and that it’s not worth ripping back.

In the middle of making this, I started worrying that I would run out of the brown yarn. When I bought the yarn, I wasn’t planning on making this particular project, I was going to make a scarf, so I only bought 3 balls. The pattern specifies 3 balls of each colour, although that was written for a bulkier yarn. Still, Annette is petite, and it would still work out, I thought. By the time I got halfway through the second sleeve, I only had half a ball of the brown yarn left! There’s no way I had enough to finish the sleeve AND the neck band. This yarn had been discontinued at Spotlight, and there were no more left in store. So I contacted Becky-Dee, who had mentioned to me that she had several balls of the brown yarn left over from another project, and we agreed to do a swap. In the meantime I kept knitting with the yarn that I had left, and you wouldn’t believe this, turned out I DO have enough yarn. (!!) With about a couple of metres left over. Oh well! Better to have too much yarn than to run out I guess! At least now I can still make a scarf as Becky-Dee sent me 3.5 balls of the yarn 🙂 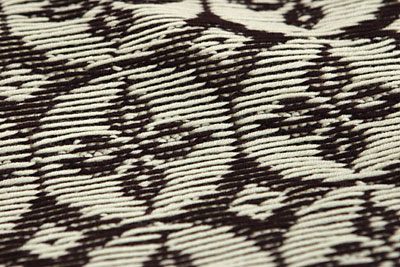 A look at side B

Some thoughts on this project:

— Colourwork / fair isle is not really that difficult. It is slower for me, because I can’t get the hang of holding a colour of yarn in each hand (which is the way to go to knit fast with colourwork). I can only ever hold the yarn in my left hand, so I pick up and drop the yarn strands as I need them. But after a while I got used to it and I got a little faster. And I tried to keep my tension even, “tried” being the operative word 🙂 My knitting is not that neat! But thankfully, the magic of blocking covers over a multitude of wonkiness 🙂

— I’ve worked out that I don’t hate seaming. It’s actually quite nice to see the project coming together. But oh I hate weaving the ends in!

— Having said that, seaming this thing was hard work. You see, this sweater/jumper is made up of colourwork pieces knitted flat, and when I knit colourwork flat (as opposed to in the round) my edges get a bit… messy, with two strands of colours being carried around the selvages. At first I tried to work the seams one stitch in, as I usually do, but it turned out that this made a very loose seam, and you can see holes through the seam. Not good! So I had to do the seams two stitches in, and that seems to do the trick. 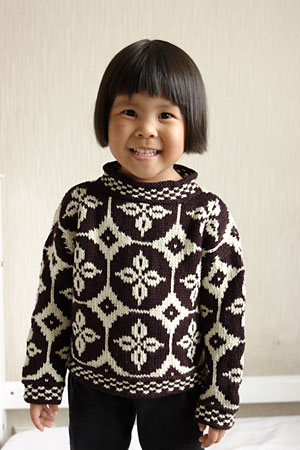 Overall, I love the result. Hopefully it will still fit Annette next winter. Colourwork looks great, but I’m not sure if it’s really for me… I guess it’s good to get it out of my system. I would still consider knitting colourwork in the round though (as I did enjoy knitting these), something I don’t have to seam. I like the look of this and these. Perhaps even steeking someday, dare I say? Well that’s for another day… 🙂

The whole family is recovering from the flu and I can’t think very well, so everything is in point form today.

— Admiring this jumper. I loved it when I first saw it on ysolda’s blog last year. I love everything about it — the stripes, the shape, the neckline, the buttons on the neck opening, the buttoned cuff. Now she’s planning a series of posts on making the jumper, which I’ll be following with great interest.

— Belinda and Kate are organising a scrap swap! Well I love patchwork (see here and here) so I can’t resist pretty scraps to turn into patchwork. I’m in! Sign ups are open until 31 August if you’d like to join in. 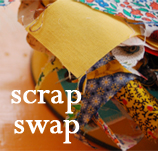 — A bunch of goodness… — If you like to sew/knit/crochet/etc with Japanese patterns but, like me, can’t read Japanese, check out this (new to me) Japanese Pattern Help from my little mochi. She has translated commonly found words in patterns, from japanese characters to english. (Found via the Amigurumi group on Ravelry.)

— Loving this tutorial for refashioning a button shirt into a toddler dress. And the result is so cute! Will consider making this for Annette sometime.

— Little Majolica is progressing. I’ve finished the back, and now on to the front. I’m a bit worried that I might run out of the dark brown yarn (d’oh!), I’m on the second ball now, and I only have 3 balls to begin with (I was going to make a scarf with the brown yarn before I thought of Little Majolica). And my local Spotlight doesn’t have any more left (d’oh d’oh!) as they seem to be stocking them for one season only (grrrr!). I think I have enough to finish the jumper… I hope so anyway. I’m trying to knit faster to beat the yarn to it 😉 I’ve been following with great interest the flashback fridays that Angela started. It’s nice that old photos are not forgotten. I myself love looking at old photos, whether they’re of me, my parents, or someone else’s. I don’t have many of my childhood photos here, most of them are at my parents’ house, thousands of miles away. But I do have an album of my baby photos, which my mum brought here when Annette was born (for lets-see-who-the-baby-look-like purposes 😉 ) This week’s theme is ‘fancy dress’. I can’t find a photo of me in fancy dress, and since this is my first flashback friday posting, how about we just start from the very beginning? This is me and my mum, I was just a few months old here in 1979. And here’s something new that I’m working on. It’s the Little Majolica sweater from Interweave Knits Fall 2006. The yarn that I’m using is Merinos Fine 100%, by Moda Vera, in pale green and deep brown. I bought them for cheap (I think it was under $3 a ball) at Spotlight, but it’s nice and soft and comes in great colours.