Yes you read that right, there is a Finished Object in the house! Haven’t seen one of those here for a while eh? I finished the Midwest Moonlight scarf last sunday, and here it is! 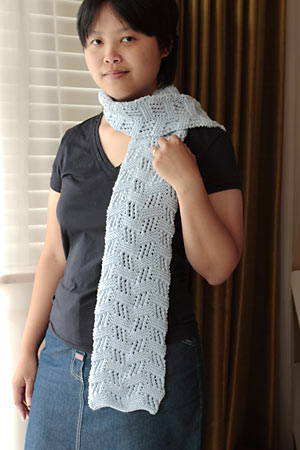 And here’s my (hopeless) attempt at posing like the model in the book. Ha ha! 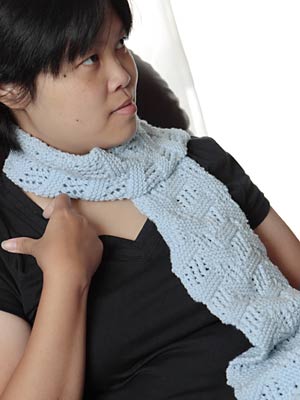 Pattern: Midwest Moonlight scarf from Scarf Style, designed by Ivy Bigelow.
Yarn: Filatura Di Crosa “Zara” in Light Baby Blue (colour no. 1462), 125m/50g, exactly 3 balls (basically I just kept doing the repeats until I almost run out of yarn).
Needles: Grey aluminium 4mm / US 6.
Final measurement: 146cm (57.5 inches) long, 15cm (6 inches) wide, unblocked. Perhaps it could be longer and wider if I block it, but I don’t think I will block it as I already like the way it looks as it is.
Modifications: I made the scarf narrower than in the book, so I casted on 33 sts instead of the 49 sts instructed in the book, and did only 2 pattern repeats each row instead of 3 repeats.

I think this is my favourite scarf so far! I love how it looks unusual, with the slants and the eyelets and all. And yet it’s so simple to make! Love it.

I think I’m down with another case of Startitis. Already I have casted on two of the scarves from Scarf Style. One is the Backyard Leaves Scarf by Annie Modesitt, using Cleckheaton Country 8-ply yarn in a green shade. I’ve seen many many beautiful Backyard Leaves scarf out there on the blogosphere, they make me swoon by their drapey sophisticatedness.

After seeing the pattern and working on a couple of repeats, I realise that Annie Modesitt is a genius. I could never come up with anything like this myself in a million years. Take the slip stitch edge. After seeing it in action I was filled with awe at how amazing the edging looks. It’s smooth, it doesn’t curl, and it gives a nice rounded edge. And she has stitches that I’d never thought of making (like the knit and purl on the same stitch).

Progress has been rather slow on this scarf, as I still need to look at the chart every row. Although I do feel I’m getting faster. Some parts of the chart are quite easy to memorise (such as the edging). 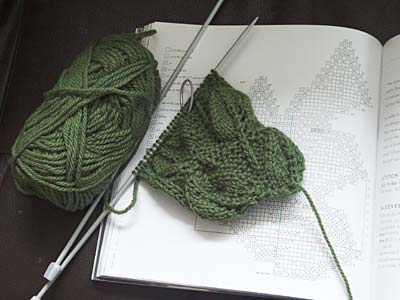 (Pardon the dark pictures, I just happen to be taking these pics on a rainy day…)

Scarf number two is the Midwest Moonlight by Ivy Bigelow, using Filatura Di Crosa “Zara” yarn in light baby blue. I’m not sure if ‘Midwest Moonlight’ is a good description of the scarf (I don’t know, I’ve never been to the Midwest nor see its moonlight), but it sure is a pretty scarf.

The pattern for this scarf is a lot easier to memorise, and so as you can see, progress has been much faster. I’m already halfway through the second ball (out of the planned three balls).

What I like about this scarf is that, the stitches in each row are very simple, yet the mere placement of the stitches on top of each other makes a stunning and unique effect. 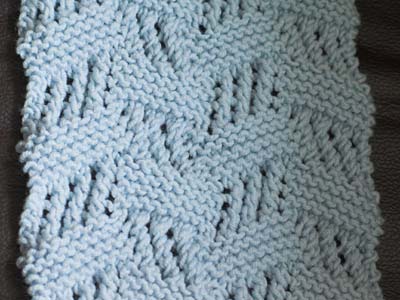